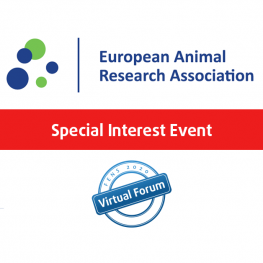 The aim of this event is to reassure the scientific research community that speaking openly about their research will be a positive and not a negative experience. We hope that the event, will help to kick-start a cultural change and support research institutions to handle this issue constructively.

The European Animal Research Association (EARA) invites you to attend an online panel discussion on how to improve openness in communications about animal research with audiences such as the general public, political decision makers, and opinion formers.

The event is designed to support researchers and institutions that wish to be more open about the animal research they conduct. The focal theme of the workshop is to discuss how and why scientists, researchers, press officers and other stakeholders should talk about animal research; it is not a debate about the ethics of animal experimentation.

The discussion is relevant for members of institutions that are involved in animal research – directly or indirectly – and are currently hesitant to write about animal research, speak about it to the media or to participate in public engagement activities.

Openness about animal research and the issues that surround it, has been increasing in many European countries and research institutions in the last decade. Since the 2014 launch of the UK Concordat on Openness on Animal Research, research institutions in Spain, Portugal, and Belgium have also adopted policies and practices that seek to improve transparency and engage with the public.

However, there is still significant reluctance within many academic institutions, and among scientists, about speaking publicly or beginning a dialogue with the public. Many scientists are still afraid that speaking more openly about their research and their motivations will make them a target for activists, while are uncertain how to put the case for animal research to what they perceive as a sceptical public and a potentially hostile media.

At the institutional level this is also evident, as highlighted in the 2018 EARA study of European websites, which showed that out of 1200 institutions that conduct or support biomedical research using animals, under half include a recognisable website statement explaining the use of animals in research/animal welfare, while fewer than 40% carried any imagery related to animal research.